More Than Half of Canadians Are Worried About Retirement...

STOP the herd mentality and think outside the box. Everyone knows the story of the Indians leading the buffalo to stampede off the cliff. Don't be the buffalo, my friends. 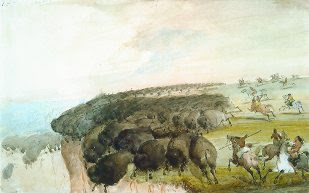 Retirement savings are only as good as the currency they're measured in. When Central Banks around the world are printing money to solve problems, your so called "Retirement Plan" is worth-LESS. Not understanding how the system works and how to measure REAL value is why many are losing their shirts in the "BUY and HOLD" for the long-term strategy. The only people benefiting from this are the financial institutions, insurance companies and financial planners, if they even deserve that title? People should be more focused on sound money management (buy-low / sell-high) by taking profits and moving them to a solid store of value like GOLD! Ask yourself, why have savings in a currency that will continually lose value forever? It is the nature of all governments to expand money and credit, which eats away at your hard earned wealth. The minute you deposit money into a bank it becomes inflationary because the bank will leverage your money to provide loans.
Folks, this time will be no different than the past. History is filled with monetary collapses and revolutions, why would anyone think that the human race has changed? The only thing throughout all of history that has survived as a currency of last resort is GOLD and SILVER. They have outlasted every government, stock market, currency, and bank that has ever existed. Why even bother to challenge this axiom? Just buy NOW!    BK

TORONTO - A newly released poll suggests that more than half of Canadians over the age of 45 are concerned that the sagging economy and volatile stock markets are squeezing their retirement savings.
The poll by Sun Life Financial (TSX:SLF) and the CARP seniors group, released Thursday, said 54 per cent of 5,500 CARP members surveyed were worried about the impact of economic turmoil on their financial security.
And a third of respondents said they fear losing money in their retirement accounts from recent stock market losses.
Posted by Central Metals Corp. at 12:15 PM